Ansel Adams, landscape photographer and environmentalist, was born in San Francisco on February 20, 1902. Though he and his family survived the great earthquake of 1906, he was permanently marked by the event when one of its aftershocks threw him to the ground and badly broke his nose. A year later, his family's fortune evaporated as result of the financial panic of 1907. This sudden loss of affluence seems to have effected his parents more than it did him.

Not fitting in at school and feeling selfconscious about his appearance, Adams led a somewhat reclusive childhood. Eventually, he left school and was tutored at home. He displayed early on an appreciation for nature and spent long hours exploring the wonders and wilds of the Golden Gate area.¹ 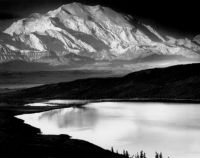 "I don't condemn a snapshot for what it is. I do, however, object to people's making a snapshot and then imposing an aesthetic value on it." ~ Ansel Adams, Playboy Magazine (May 1983)

6. Examples: The Making of 40 Photographs

9. Yosemite and the High Sierra